Island of Cyprus , the ancient Egyptians called it " Alachia " the ancient Assyrians " Iatnana" and the Phoenicians " Enkomi" was from Antiquity to the crossroads of important trade flows , assimilating the centuries different cultures from minoqan Crete, Greece Mycenaean and all around the levantine Basin , the name " Kupros " means copper , wirh reference to large depositif of this metal , which ensured its fame and prosperity in the thoughout the mediterranean basin Cyprus was also known for its many spices and plantations .The Historyof Cyprus was hectic and the island suffered many institutions : Hellenistic , Roman , Bysantine, Arab, Frankish , Venetian , Ottoman & British finally

Cyprus is an island located in the levantine Basin , which is the easternmost part of the mediterranean Sea , often considered European but south of Anatolia ( Asian part of modern Turkey ) and face of Syria , while being a member of the European Union for its de facto southern part of the island to swear. It has a population of about 1.3 million peoples , mostly greek with Turkish minority and installed in British military enclaves under the sovereignty of the Crown .The Turkish army occuping the northen part since 1974 , Cyprus ( including the capital Nicosia) is divided into two separate entities by the Green Line or Attilia Line , The Area of Cyprus is 9251 km²

It contains a variety with these mountains of troodos and Pendadactylost that rise in volcanic force exerted by the tectonic plates of africa and Eurasia , dry climate in the region of Nicosia and well course a very Mediterranean climate with the sea providing a bit of freshness during the long summer months , Average january temperature 11.9°in july average 26.6° , in January Rain Rain , in July 0.55 mmm

The vineyards of Cyprus are among the very few in the world that were not affected by the vine louse , Known as phylloxera , the catastrophic consequences of phylloxera led European vine- growers engrafting scions of well-Known European varieties onto American vine stocks which are resistant to the discrase.This resulted in vine plants resistant to phylloxera whith produce grapes whose organoleptic or sense related characteristics ie colour , aroma and flavour , are not quite identical to those of the original European vine known as Vitis Vinifera

Industry ranks 37 th in the World in terms of total production quantity 37.500 tonnes and much higher on a per capita basis Although , chronologically . Cyprus belong to the old world of wine producing countries , the industriy has gone through changes that place it more on par with the new world .The wine industry is significant contributor to the Cypriot economy through cultivation , production, employment, export & tourism

hellenistic mosaics discovered in 1962 close to the city of Paphos depicting Dionysos , god of wine

Exactly how far back wine production in Cyprus goes is unknow . wine was being traded at least as early as 2300 BC , the date of a shipwreck ( similar to the Kyremia Sip ) carring over 2.500 Amphore , discovered in 1999 , its origin and destination are unknown , but must have been along the trade route between Greece and Egypt.

more recently , two discoveries have put that date back by a few more years , The first was the discovery of a Bronze Age ( 2500 - 2000 Bc) perfumery near the village of pyrgos , near this perfumery , on olive press a winery and copper smelting works were also discivered .

Wine containners and even the seeds of grapes were unearthed , the second discovery involved an intriguing sequence of events .Dr Porphyrios Dikaios , a major figure in Cypriot archaeology and once curator of the Cyprus miseum had carried out exavations on the outskirts of Erini village between 1932 and 1935 , furing these exavations several fragments of round flasks were unearthed ( amongst other artefacts ) these pottery fragments ended up in the stores of the Cyprus museum still unwashed in wooden boxes .They were dated to the chalcoltthic period ( between 3500 bc & 3000 bc .in 2005 , well after Dr dikaios death the chemical signatures of 18 of these were examined by a team of Italian archaeologist led by Maria- Rosaria Belgiono .Twelve of these showed traces of thartaric acid ( acomponemet of wine proving that the 5 500 year oldvases were used for wine.

During the ottoman occupation of the island , wine production went into decline . This was attributed to two factor : Islamic tradition and the heavy taxation . Indicative are reports written maintly by French and British travelers of the time ; Cyrus redding writes in 1851 : the wine broxer of Cyprus hides from his neighbour the amount of his vintage , and always buries part of his produce for concealment ; the exactions of the government are so great , that his profit upon what he allows to be seen is too little to remunerate him fof his loss in time and labour . The quality odf the wine produced also lagged behind times with Samuel Baker referring to Cypriot wines in 1879 .It should be understood that no quality of Cyprus wines is suitable to the English palate. 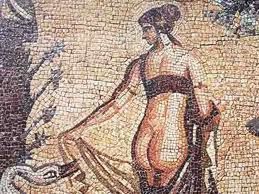