which was the time of the Hittite Empire, 2000 years before our era, one of the fastest growing in the Mediterranean basin, disappeared with the fall of Constantinople. Only remained a lean culture table grapes which lasted until the early twentieth century when the Ottoman Empire became a republic whose laws permit again to produce wine.
If today Turkey ranks fourth in the world with 420,000 hectares, 95% of the production is consumed fresh and dried grapes
In antiquity wine abounded both along the coast of the Aegean Sea, in Thrace and Anatolia
The conquest of Anatolia by the Seljuks in the Byzantine Empire had the effect, in the name of Islam, the prohibition of the use of vin2. This prohibition extended under the Ottomans, does not seem to have been applied to the Christian populations: Armenians in particular produced wine
Mustapha Kemal, founder in 1923 of the Turkish republic, true to its secular principles, gave legal viticulture. This decision resulted, in 1929, the establishment of a "Center for Research Wineries" whose purpose was to upgrade at first the traditional methods of cultivation of the vine, and then classify two to three hundred varieties used up then table grapes.
Many of these varieties can be used to develop a quality wine, it was decided to import during the 1970s varietals of French tank: Chardonnay, Sauvignon Blanc, Semillon, Cabernet Sauvignon, Pinot, Traminer, Cabernet and Merlot.
It is ensured by half by both state monopolies by private farms. The vast majority of wines are white (beyaz), the remainder being divided between the pink (pembe) and red (kırmızı).
On the coast of the Aegean Sea, is produced a dry white wine, izmir, made from a local grape, Sultaniyeh, seedless variety. Dry wine, with golden yellow color, very aromatic, it as between 11 and 12 °.
Thrace produces guzel marmara in winemaking another local variety, yapinçak. This dry wine with a straw yellow color with green hues, has a slight bitterness which makes it very refreshing.
Other white wine, with a very characteristic flavor, Urgup considered one of the best wines you narbag, which is produced from Narince liberates the nose fruity aromas but his mouth is a little too sweet.
The buzbag, the deep red color with bluish, is a wine made from grapes Öküzgözü or "bull's eye".
The bügazkar is also a wine. Its high tannin content did called "choke"
In the Ankara region, kalebag is developed based Kalecik the grape. This red as up to 13, 5 and its high content of glycerol makes it very soft in the mouth.
Thrace is developed from the traka variety papaz Karasi. Bodied, with dark wine red dress, it is usually bottled after three years
The özel Doluca kavest product in the regions of Diyarbakir and Elazig.
Turkey mainly exports its wines in Germany, Denmark and Sweden
Turkish vineyard has 520,000 hectares and produces 4,000,000 tons of grapes per hectare yield is about eight tons. 95% of this production is for the fresh market (table grapes) and dry. (Raisin) Only 5% of the production is vinified.
90% of wine is provided by a dozen wineries.
The average local consumption of wine per capita is one liter per year. It reflects a disparity centered in cities, mainly in classes western lifestyle. The trade balance is slightly positive with imports amounting in 2007 to $ 3.1 million against the exports of $ 3.85 million. 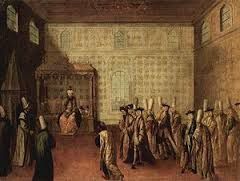