The Swiss Jura and Vine

The Switzerland Jura
More often called Jura or Canton Jura , is the 26th and last canton of Switzerland , whose capital is Delémont . It is located in Northwest Switzerland , in the Espace Mittelland , and the majority of its population speaking French as their mother tongue , is also part of the Suisse Romande. Its highest point is Mount Raimeux , culminating at 1302 m , the lowest point is the Allaine to 364 m , covers an area of ​​838.55 km2.
The inhabitants are called Jura Jura and Jurassiennes .
The canton of Jura in the north- west of Switzerland at the French border. To the south lies the canton of Bern , those east of Solothurn and Basel-Country . As for the west and north , are the French departments of Doubs , of Belfort ( Franche -Comté ) and Haut -Rhin ( Alsace ) .
The canton of Jura has its roots in 999 , when the last king of Burgundy gives the Bishop of Basel Abbey Moutier- Grandval and its dependencies. From 1032, the bishopric of Basel is attached to the Holy Roman Empire . In the early sixteenth century , the bishop is gradually removed from power and must leave the city of Basel when the reform is adopted. It will install in Porrentruy , a town in the current Jura . The remaining land , on which he will reign until the outbreak of the French Revolution, more or less corresponds to what is now called the "historical Jura " ( canton of Jura Bernese Jura and Laufen ) . After 1648 and the Treaty of Westphalia , the Jura , separated from the rest of the Holy Roman Empire, expanding its links with the Swiss Confederation.

The Damascene is the name of a regional water spirits produced mainly Ajoie from so called Damascene plum , from a variety of plum of Damascus : the damassinier .

First Planting date as 1986 and the first harvest was in 1990. Seems it all the more surprising that this region has a beneficial microclimate and an equally suitable rocky soil , currently reds from pinot noir are more convincing than whites based Riesling , Sylvaner , Müller- Thurgau. When Pinot Noir will mature within a year, they should book us some good surprise ( Pinot Gris to also produces excellent résultas
The site is very favorable for planting the vine, since these areas are around 400 m and the Jura microclimates on the sunny slopes are known for their fantastic floral diversity in the field of thermophilic plants and sèchardes ( Teucrio Mesobrometum - based Braun- Blanquet ) .

Centre Ajoie grouping about 500 ajoulots grain producers decided to purchase plots in 1987 , planting took place in 1988 and the first harvest was marketed in 1990 . It was decided to planting vines Garanoir (early red) , Riesling x Sylvaner and Pinot Gris .
The Jura wine and that of Rauracie is a story of the reconquest by this type of culture. In the 1960s there were only a few individuals who practiced amateur wine in small areas (less than 500 m2 by owner) and for personal use . These fans of the first generation is to mention Fridolin Chételat in Montsevelier the farm on Mont Lucelle , planting of Marshal Foch Riddes above Pierre Joray . These tests are not the outbreak of a new era of reconquest of the Jura and rauracienne viticulture, but demonstrates the interest and passion surrounding this very special culture.

In 1980 on the personal initiative of Martin Buser Montsevelier the vine was planted over an area of ​​nearly 30 acres. This is the first test that exceeds production for personal consumption viticuleur . Then the vine Zwingen was born by the relentlessness of Fredy Müller in 1984. There more than 3 ha were planted in order to live the fruit of the vine . Then late 80 Clos des Cantons was born on the initiative of the Centre Ajoie who decided to buy the land in 1987 and the latest addition to this wave of conquest wine is Valentin Blattner to Soyhières in 1991. And many others were stitched virus as the "Happy winemakers Terbi " ( Courcelon and Corban ) with grape Regent Vermes ( Dunkelfelder and Garanoir ) Burgerbibliothek Dittingen ( RxS and Pinot Noir ) , etc. . Vine Liesberg (32 a) was planted in 2000 to make wine applied research and allow its owner ( Martin Buser ) added to its surface Montsevelier .

Another plant is the vine Vermes Thomas Dennert . The latter two varieties planted , Garanoir and Dunkelfelder on a sun on a 17 surface slope. Unfortunately this site is partly in winter the cold air and lake temperatures drop regularly below -20 ° and this has caused the loss of a large number of vines during the winter of 2004 /2005. Its clusters are in vignifiées Fredi Müller Zwingen which makes it a wine that gives great joy to consumers. Thomas Dennert sells wine at its traditional day of wine late June , this is where local consumers and ammateurs meet. It has also its own particular there cow cheese , candied fruits , jams , apple juice , his famous home salami , dried meat etc. . all products of the organic farm that sells this nice little market. 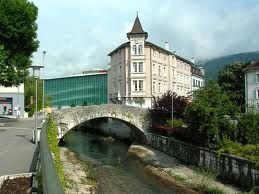